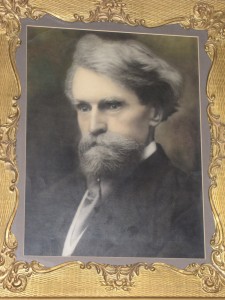 William Andrews Clark slept in a very comfortable, elegantly carved bed in his 34-room Butte, Montana, mansion. He could call his servants from this room, and nearly every other, for that matter. He kept a liquor stash in the billiard room. And he could escape boring dinner table conversation through a secret door shaped like a window that led to a side porch.

I know this after having crashed my great grand uncle’s house this weekend. It is now a bed and breakfast, the Copper King Mansion. Though I slept in his bed, under his disapproving, abstract glare, and sullied his bath tub, that was about the extent of my mischief. I was tempted to sneak a drink of his booze and maybe smoke a cigar on his porch. I did get to sit at his place at the head of the table for breakfast.

Clark’s countenance staring down at me from the opposite wall didn’t make it easy to sleep. I could tell by the look on his face that he knew that I knew he bought his election to the Senate in 1899. He could tell that I didn’t approve. The whole thing would have gone easier had his portrait been able to talk.

Because what I really wanted to know was whether my great grandmother, Elizabeth Boner, lived here. I suspect she did. Elizabeth’s mother, Sarah, Clark’s older sister, died when Elizabeth was seven. My mother always said that great grandmother was raised by the Clarks, and it was probably in this house. Her future husband, J.E. Thompson, it turns out, lived on the opposite corner, at 304 Granite. I suspect the original Thompson home is gone.

Elizabeth’s father, John Q. Boner (pronounced Bonner, damn it), was a real estate agent, according to the 1880 Census. The family lived in Sullivan County, Missouri, in the north central portion of the state.  That’s the middle of nowhere, and may explain why she was sent to Montana.

In fact, I thought I heard the ghost of Elizabeth Boner Thompson dancing above my head in the 3rd-floor ballroom last night. Or maybe it was the rhythmic popping of the 100-year-old boiler. Or it could have been rain hitting the beleaguered roof. It was probably all in my imagination.

Thankfully, the sheets in Clark’s bed had been changed since he last slept here in the early part of the 19th century. So had the mattress and box spring. But plenty else still remained in the room, like the sycamore woodwork, hand-carved fireplace, and burled walnut bed. Same with the stained-glass windows.

Clark, who arrived in Montana in 1863, was one of the three great Copper Kings of Butte. He built his mansion between 1884 and 1888, just about the time that Bess would have been looking for a place to stay. His first wife, Kate, died in 1893, leaving him four grown children. But he found a cure for his loneliness.

In 1904, while in the Senate, Clark announced that he had taken a second wife, in France three years earlier, and that the couple already had a 2-year-old daughter. At the time of the supposed marriage, he was 62, and wife Anna was 23. That’s something else I would like to ask him about.

Clark and Anna probably shared the sofa in the master’s sitting room, one of only 26 pieces owned by Clark that remain the mansion, which is open for tours during the nicer months. The family that currently owns the home bought it in the 1950s and recently received a grant to replace the boiler and fix the roof.

The home was considered high-tech when it was built, and for good reason. It was wired for electricity–with copper wire, befittingly. The chandeliers were set up to run on both gas and electricity. The Clarks could even signal the police for security.

Also, the family and its guests did not use an out-house, unless, of course, they really wanted to, and then they might have to go around the corner to find one. But why would they, when the house was outfitted with running water and bathrooms galore? It not only had indoor plumbing, but most of the bathrooms had bidets!

Having bathed in Clark’s tub, it’s pretty clear that people were much smaller 100 years ago. Or I have gotten much bigger in recent years. It’s probably a little of both.

The mansion was a huge upgrade from the small log cabin in Pennsylvania where Clark was born in 1839. The son of Scotch-Irish parents, he moved with his family to Iowa in 1856. He taught school and studied law at Iowa Wesleyan College. Though he never practiced, his knowledge of legal matters surely came in handy later.

After working in quartz mines in Colorado in 1863, Clark went to Montana, hoping to find his fortune in gold. He staked a small claim near Bannack, Montana, but it didn’t pan out. The gold was locked up in quartz ore, and there was no mill to process it. He switched to a career in trading, moving goods back and forth from Salt Lake City.

Clark ultimately made his fortune as a banker in Dear Lodge, Montana. He wound up repossessing mines, smelters, newspapers, and other businesses. The mill he got on foreclosure wound up being a real money-maker; he made a killing milling the ore of others.

Clark used his newspaper, the Butte Miner, to push his political ambitions. He repeatedly tried to gain election to the Senate, but was rebuffed each time.

He bought his way into a Senate nomination in 1899, when it was revealed that he bribed members of the Montana State Legislature in return for their votes. Senators were selected by their state legislatures at the time. The U.S. Senate refused to seat him. Clark later said privately, “I never bought a man who wasn’t for sale.”

Clark “won” again a couple years later, this time with the help of the miner’s union. He served a single, undistinguished term from 1901 to 1907, according to political pundits. He earned perhaps his most notoriety with his announcement that he had secretly married his former ward.

Clark earned Mark Twain’s ire. Twain wrote, “He is as rotten a human being as can be found anywhere under the flag; he is a shame to the American nation, and no one has helped to send him to the Senate who did not know that his proper place was the penitentiary, with a chain and ball on his legs.”

Maybe that’s why Clark was scowling.

Roadblock Ahead: Tracing the Boyce Line Back to West Virginia

Charting My Jewish Roots Along a Misleading Path