The year was 1970. The occasion was the annual Phoenix Home and Garden Show. The opportunity was to open my great grandfather J.E. Thompson’s 46-year-old Rancho Joaquina estate for public viewing. The problem: It was a mess, inside and out.

In stepped the local chapter of the American Institute of Interior Designers, along with The Phoenix Art Museum, to restore, refurbish, and redecorate the two-story, 11-room mansion to a semblance of its former glory. Attendees paid $2 a head to see the place.

The interior designers apparently had their work cut out for them. The home, though an architectural treasure, had fallen into disrepair. It had changed hands several times, fallen prey to “remuddling” efforts, and spent years unoccupied, an unworthy fate for such a grand structure.

J.E., who made a fortune on Wall Street in his thirties, in 1924 commissioned the renown Phoenix architectural firm of Fitzhugh & Byron to design the home in an authentic adobe style, with 2-foot-thick walls, six fireplaces, deep-set windows, and interior and exterior arches. The house was placed on the National Register of Historic Places in 1984. “This was the earliest known adobe revival building in Phoenix,” says the listing petition. “Rancho Joaquina firmly established the use of adobe for elegant Phoenix homes.”

By 1970, however, when it was to be shown to the public, the estate had been reduced to a shadow of its former self. By this time, the six arches that connected the living room to a long, 48-by-10 foot covered patio, where the family photo below was shot, had been glassed in. Designers covered the floor with a white wool shag rug. They created a sitting area with two quilted chintz sofas on zinnia lacquered frames arranged to offer a view of the lawn.

They clearly went overboard with the interior scheme for the porch, where wicker furniture had sufficed for J.E. “The patterned chintz has a chocolate background with accents of parrot green and pineapple. Zinnia, an orange-brandy hue, is repeated in the sailcloth draperies, which are trimmed in a pineapple cotton braiding.”

Another upstairs bedroom, the rose room, posed a thorny challenge to the interior designers. According to Phoenix magazine, it had too many doors and an “unsightly” heating unit. The designers decided to give the rose room a pink theme, adding pink soft lights and mirrors, a pink carpet, pink draperies, and pale pink locked moire-over-foil wall coverings. “The heating unit was disguised as a planter, the wall behind it mirrored to add dimension to what had been a dead room.” The room, according to the magazine, was transformed into a “thing of beauty.” J.E., regularly pictured with a cigar between his lips, unfortunately wasn’t around to offer comment.

A short review of the floor plan is in order. The home, according to a real estate brochure from the 1970s, featured a large 19-by-14 tiled entry with an elevator to the second floor. The first level also contains a dining room, dressing room, family room, kitchen, laundry, studio, and potting studio. A first-floor bedroom, according to the brochure, is “ideal for live-in help.” Upstairs, a large master suite included a sitting room with a fireplace, a bedroom, a full bath plus a dressing room, and an enclosed porch. The East Suite on the upstairs level contains a sitting room, a library, and a bath.

By 1970, when the house tours took place, J.E.’s ranch had been whittled down to a big house with some nice grounds, a shadow of its former self. J.E. had used his earnings in the stock market and mining to buy a full 80 acres between 46th and 48th streets and Osborn and Thomas Roads. At the time, the site was located about nine miles outside of town. Today, 4630 E. Cheery Lynn Road is within a close-in suburb, surrounded by undistinguished 2000-square-foot ranch homes.

J.E. and Bess lived in a more modest home on the property while they built their mansion. But they didn’t stop the project until they had built a compound, with a six-room guest house, six smaller guest cottages, servants’ quarters, stables, and even a small lookout post against a back wall. J.E. spread adobe walls liberally throughout the estate to separate the buildings and provide privacy.

Despite its many buildings, Ranch Joaquina’s landscaping may have been even more impressive. The estate was a horticultural preserve, literally and figuratively. J.E. planted virtually every type of semitropical bush, shrub, and tree that he could buy, importing plants from around the globe. He brought in the largest variety of date palms in the world, most of them from Arabia. At the peak of his horticultural effort, in about 1929, just before the big depression, the south section of the property was converted into a commercial nursery with date gardens.

The lush, manicured grounds — J.E. employed as many as 15 gardeners — combined with the buildings to produce a resort-like setting. Guests would often gather in an olive grove on the east side of the house, where an outdoor dining area was set beneath sheltering leaves. They would gaze at a two-fountain reflecting pool designed with ornamental tiles from Italy. To another side was a huge open kitchen with a barbecue pit so big that 40 steaks could be broiled simultaneously.

One area of the grounds, called “the jungle” in later years, supposedly contained a tree from every country.

For visitors who weren’t into plants, like my father and his brother vacationing there during the summer, J.E. thoughtfully included a swimming pool with a two-story bathhouse (a series of large rooms underneath the bathhouse were apparently used for bathing, messages, and shaving), a miniature golf course, a croquet field, and a stable — Bess rode a horse virtually every day. There was also a playhouse among the olive trees, built from old wood that lined the first irrigation ditches in the area. An arbor leading to the pool area contained tiles illustrating the story of Don Quixote. By 1961, though, only one tiled wall remained, so I guess you had to read the book. 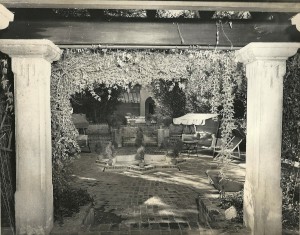 J.E. died in 1950. Four years later, in the settlement of his estate, two Eastern physicians purchased 33 acres around the main house, reportedly paying $4,000 an acre. The physicians hoped to establish a luxury rest home, a sanatorium in other words, but their plan didn’t pan out partly because of differences with the city’s development board. The main estate was then whittled down by sub-dividers who built homes in what’s now the El Coronado Estates community.

State Senator Hubert Merryweather bought the house and some surrounding acreage in 1956. He sold it in 1967 to Mrs. Elizabeth Hazen of Tucson. In that year, Hazen and Merryweather asked the city to rezone the 12.5 acres that remained around the main residence, which took up another acre, to produce 47 homes. Hazen, who was from Tucson, valued the 12.5 acres at $20,000 an acre.

During much of the 1960s, the house was unoccupied and the grounds had fallen into disrepair. Rancho Joaquina, according to wary locals, was haunted. Children who wandered onto the grounds would run screaming, swearing they had seen a ghost. It’s not clear whether the house was occupied during the early 1970s.

When Nan Pyle bought the house in 1978 (she owned it until her death in 1985), it was an overgrown jungle, according to newspaper reports. She told a Phoenix garden writer that she had to remove 20 years of palm frond droppings. She restored a fountain, plugged new plants to go with the ones planted by J.E., and built a new brick walk. Two full-time gardeners cared for the site.

During Pyle’s time, the gardens became a meeting place for the Desert Botanical Garden and other local organizations. The garden experience, according to one writer, began around the pool and restored fountain, “a large, bubbling, margarita-shaped structure with goldfish and blooming waterlilies.” The fountain and pool, he wrote, were surrounded by thirty-foot oleander trees that had “grown thick in red and white.” Everywhere, J.E.’s specimens had matured to grow like trees. Ground cover had grown rampant as well. The garden court was blanketed with hibiscus, cape honey suckle, pyracantha, camellia, and Japanese privet.

A hidden walk on the opposite side of the read-and-white oleanders led past giant stalks of bamboo, mature chinaberries, Goldwater pines, a towering silk oak, and a few of J.E.’s original date palms. A pond in the clearing, shaped like a butterfly, was dusted with a ground cover of vinca. Star jasmine and Algerian ivy, with its trademark large leafs and needle points, enveloped other patches along the walk.

The place was a botanist’s paradise. “Perennials and annuals cluster off the walk, colorful fillers like populace (moss roset), dianthus, begonias, and hearts and flowers. There is also a good sampling of roses, floribundas, climbers, and hybrid teas (including the difficult to grow but spectacularly silvery lavender ‘Sterling Silver’).”

The garden was bordered by a pink-colored adobe wall that circled into a small tower. The tower, equipped with a table and umbrella, had once overlooked sheep farms. The adobe wall was covered with cat’s claw that turns from green to yellow in the spring. The garden was reportedly a haven for birds — hummingbirds, songbirds, and pigmy owls.

The house received yet another make-over by a famous interior designer in recent years. You can click here to see what the living room of the house looks like today. The living room now beckons with “refined tones of caramels and blacks and accents of golden tobacco.” One can only hope those accents weren’t left by the cigar-chomping J.E.

Click on the images in the gallery to blow them up!