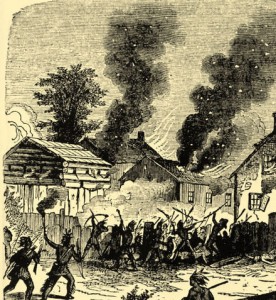 I may have been deep asleep when my teacher covered King Phillip’s War, which was played out in New England from 1675 to 1676. But this fact would have raised me from my stupor: One of my very distant relatives, John Libby (1603-1685), lost his house and two sons in the fighting.

If you are like me — I grew up in the Midwest and had trouble concentrating during elementary school — you probably recall absolutely nothing about this war. It doesn’t help that the name is misleading. “King Phillip” was an Indian, not a member of British royalty. His real name was Metacomet, and he was the leader of the Wampanoag tribe. He was fighting angry about the Puritans killing his people, reneging on deals, and stealing his land. It was his evil Puritan adversaries who gave him the exalted nickname.

New Englanders are probably more likely to remember King Phillip’s War, which has been called the single greatest calamity of 17th-century Puritan New England. Nearly half of New England’s towns were destroyed in the fighting. It’s hard to feel sorry for the Puritans given the decades of violence they had wreaked on Indians.

What’s perhaps most interesting about the war, from an admittedly narrow viewpoint, was that a Thompson relative was involved. We know this thanks to the painstaking work of Sue Wolfe who found a relation to the Libbys through the Pickering side of the family. Grandmother Meanie’s grandfather “was a Pickering,” as my mother used to say. Her grandfather, Frederick Manthano, left Maine in the late 1880s for San Francisco, where he married his childhood sweetheart, the very French and very lovely Marie Gingras. But I digress….

John Libby, the patriarch of the Libby clan in America, settled in Maine in about 1637, according to innumerable books and blog postings. (The Libby family may be on of the most extensively researched in America.) He came by boat, since there weren’t many other transportation alternatives in those days, from Broadstairs, Kent County, England after a middle class upbringing. Once in the New Land, he worked for several years as an indentured servant or “white slave,” though it looks like he eventually rose to become one of the early one percenters.

Libby actually put something in writing that speaks to why he left his home, and a wife, to sail to the New Land. It sounds like he was misled by religious dogma common at the time, but that’s open to historical interpretation. “The good and pious report that was spread abroad, into our Native Land of this country, caused your petitioner to come for this land 47 (sic) yeares ago, where he hath ever since continued,” he wrote in a July 1677 petition.

What’s remarkable about Libby’s statement, and his apparent steadfast faith about a “good and pious” America, is that he wrote this after Indians killed two of his sons and burned his homestead. Perhaps he figured that was part of God’s plan.

The event that triggered Phillip’s War was the hanging of three Wampanoag Indians for allegedly murdering a Christianized Indian, John Sassamon, who had warned Plymouth officials of a pending Wampanoag rebellion. In a move that must have really pissed off tribal elders, Plymouth officials produced an Indian witness at the trial who identified the three alleged Indian murderers. Talk about indisputable testimony.

The hostilities began late in the summer of 1675, when Indians began to appear at Black Point, the easternmost settlement in Maine, near present-day Portland, where perhaps not uncoincidentally some Thompsons are settled today. They shot cattle, ravaged crops, and burned down homes — all that good stuff. The Libbys, who lived too far inland to be protected by the nearest garrison, were as they say “compelled to leave their homestead for safer ground.” Their crops were gathered under the protection of soldiers who came up from Boston.

But the soldiers couldn’t save the Libby property. In fact, they watched it burn. Joshua Scottow, who was in charge of the Boston contingent, wrote on September 7th, 1675 that “the enemy” in the early morning burned eight or nine deserted houses belonging to Libby and his children. The situation grew so dire that by October 1676 the Black Point Garrison was deserted. Most inhabitants, including the Libbys, fled to Boston.

For some reason, contrary to their custom, according to Puritan reports, the Indians didn’t burn down the garrison. Because of that, some “able-bodied men,” apparently including several Libby sons, could return to it. Massachusetts sent soldiers, aided by Indian guides, to re-secure Black Point for settlement. But they fell into a trap.

In late June, while pursuing some Indians sent out as a ruse, the Massachusetts company was ambushed by warriors under Chief Squando. More than half of a New England militia of 100 was either killed or mortally wounded. It was an embarrassing defeat.

Libby lost two of his sons at around this time. Either James or Samuel was killed at Black Point in the spring of 1677, presumably before the military blunder, but maybe during it. The other was taken sick in the Garrison, carried to Boston, and died there on July 9, 1677.

The very next day, John Libby, now living in Boston, petitioned the Governor and a ruling council to discharge his two other children, Henry and Anthony, from the garrison. He argued that he depended on them for  support. In those days, elderly farmers often counted on their grown children to work the farm for them. Libby had a lot of land. A will settled many years later details that Libby’s holdings at Black Point included 100 acres of upland, 9 acres of fresh meadow, and 100 acres of salt marsh.

The petition was granted. And the Libby boys apparently weren’t missed from the garrison — there wasn’t much fighting in Black Point after June 1677. The family probably returned to Black Point shortly after the sons were discharged. Peace terms were ratified on April 12, 1678.

Because he was the first Libby on this continent, John’s history has been well-documented by genealogists. He married twice. His first wife was the mother of all his sons except Matthew and Daniel and probably all his daughters. She stayed behind in England, according to the History of Maine.  His second wife, Mary, probably lived long enough to be driven from the family property by the Indians.

John Libby came to the New World to work for one of the English merchants chiefly responsible for settling Maine. They sent several vessels each year in the mid-1600s to fish the Maine coast, often setting up trading houses to buy furs from Indians and to supply their fishermen.

Libby arrived in New England in 1637 aboard the ship Hercules mastered by William Chappel. Most of the passengers were fishermen who had left their families in England. Some returned unfit to England. Others ran off once they arrived. Libby was typical of those who stayed and founded families and villages in the Maine wilderness. He put in his contractual obligation of about three years at the trading house before moving on.

Libby’s name makes its first appearance as an employee of Mr. Trelawny at one of these trading houses, on Richmond’s Island, along the coast of Cumberland county, Maine. He worked there as an indentured servant until 1639, according to the Genealogy and Family History of the State of Maine, earning five pounds a year, though more money was probably sent back to his wife. He was paid in brandy, wine, and beaver pelts, with the balance in cash. It’s not clear how his wife was paid, though she probably could have used some brandy, too.

By 1640, Libby was living as a tenant on land alongside what has since been called Libby River. He did a lot of fishing while he waited to receive his own acreage. In 1663, he formally received a grant of land in Scarborough on the banks of the Libby River. Described by history books as a man of energy, he built a house there and divided his time between fishing and agriculture.

A 1663 document describes him as a “planter.” The History of Scarborough calls him one of the town’s “principal” planters. He served as town constable in 1664. His name stands first of the four selectmen in a town grant from 1669.

Libby’s progeny left an indelible mark on New England’s heritage, according to The Genealogical and Family History of the State of Maine.  “The family numbers its revolutionary soldiers by scores, and many hundreds risked their lives for their country in the war of the rebellion. In Maine alone there were two hundred and fifty-six enlistments. They are, as a family, very devout, and have figured much more largely in the religious than in the civil institutions of the communities in which they have lived.

“The family has abounded in christian ministers, elders and deacons, while generation after generation has died in the faith. Very few have been guilty of bringing any reproach upon the name, and even in Maine, where the family is so numerous as to rank with the Smiths and Browns, it has been remarked by many that they never knew of a criminal or a pauper named Libby.”

No Surprise: Isaie Gingras Was Buried in a Catholic Cemetery