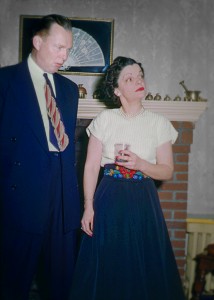 Andrea Calfee sent along this wonderful picture of Meany and Bill Thompson, which was taken by Andrea’s mother, Galia Kelsey, at their home in Eastchester, N.Y., circa 1951-1952. Meany, who was a marvelous seamstress, is wearing a beautiful beaded belt made by Andrea’s grandmother.

“My grandmother was very near-sighted and could do beautiful ‘close’ work like embroidery and beading. She was also trained as a bacteriologist (now called microbiologist) and made some discoveries of bacteria herself. Her husband, Andre Dudukalov, was a veterinarian who specialized in diseases of cattle (plague, anthrax, etc.) and they worked together for many years in Russia’s Far East and in Mongolia, where they helped the various indigenous tribal groups, mostly nomadic, to protect their cattle herds from disease.

“My grandfather was also awarded a ‘knighthood’ by the Mongolian government in honor of his work. Unfortunately, he was arrested and died a few months later at the hands of the Bolsheviks.

“My grandmother, after many years of despair of not knowing his whereabouts, finally was able to get to the U.S. She lived first in California with my mother’s sister, Alla, and her family and then came to New York to live with my parents and brother Sandy (Andrew). I was born in Bronxville in 1945. My mother used to say that I was Babushka’s last love.

“I learned to read from her before I got to Kindergarten. I was just eight years old when she died in the spring of 1953, at the age of 73. Not very old by today’s standards. Mom said she basically died of a broken heart. Sad story, but it always empowered me to know it.”